La Janelle was a 466 foot, 1,000 passenger luxury liner launched from Quincy, Massachusetts on September 24, 1930. On April 13th, 1970 it was moored outside of the Port Hueneme Harbor, where a storm pushed the ship into shore. Many attempts were made to salvage the ship, however, each failed. The Navy Seabees cut the ship and extended the jetty by placing large boulders around the hull.

Directions:
Basically, take Victoria Ave all the way south, take the fork to the left which turns into Roosevelt which then turns into Channel Island View. At the end, you will see the gate to the Navy base, but just before you get there, follow the road to the right (Sawtelle) and take it to the end / parking lot.
Location Details 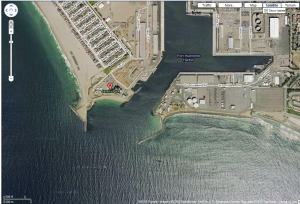 Save Money and lock in your pricing with our exclusive iDiveMore plans - visit www.idivemore.com or see link below
Has your Regulator been serviced lately. SCDiving is the only Dive Shop in Ventura County that performs Computer Diagnostics of your regulator 1st and 2nd Stages. Ask us about our $99 + parts regulator overhaul special!
Now is a great time to get your Tank Hydro Tested or Visual Inspections completed, so your ready for summer!
close
Toogle Down